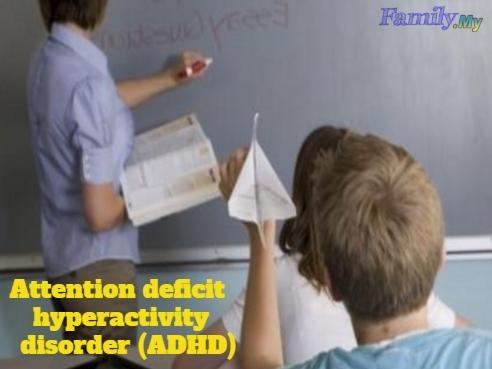 ADHD or Attention-Deficit/ Hyperactivity Disorder are a common health problem faced by people around the world. It is a situation where the person faces problem in focusing or paying attention for a long period of time. In fact, ADHD patients are very hyper-active and is mostly fidgety at most times while they do have impulsive behaviors which they cannot control at times. It is a behavioural disorder associated with inattentiveness, over-activity, impulsivity, or a combination of all these characteristics.

Prevalence
It can be detected at an early age when the child has difficulty to concentrate, listen and attend to details. He/she can be easily distracted by other things and is slightly disorganized as well as forgetful. Besides that, the child may have trouble waiting or sharing their objects with others due to impatience. And of course, they are constantly moving or fidgeting because the child cannot sit still at one place. He/she talks excessively without considering those people surrounding them. ADHD may run in families but there are other factors causing a child to suffer from ADHD.

Reports indicated that ADHD is more prevalent among boys (four to nine times) than in girls. Experts said children with this behavioural disorder perform better with male teachers because the teachers talk less as compared to female peers. Other than that, male teachers also have a different teaching style that enhances disorganized children to pay attention. Surprisingly, fathers are also more tolerant with the child‘s behavior than mothers. Some reported child diagnosed with ADHD fall back academically due to poor concentration in class and they also struggle socially due to communication problems with those of their age. A study conducted by National Institute of Mental Health (NIH) found that girls with ADHD are more likely to have inattentive symptoms and display higher levels of mood swings and anxiety disorders. Affected girls are at higher risk of increased alcohol and drug usage.

Prevention
People who have ADHD are usually born with this disease which make is a whole lot complicated to cure. Although there is no known cure for ADHD, there are many treatment programmes that have been practiced to help the child improve in terms of paying attention and controlling of their emotions so that they can grow up in the best conditions possible.

ADHD is a common health problem with babies and as such, prevention of this disease must come from the parents. This is most prominent for pregnant women who should take all the relevant and required nutrition and supplements during the course of the pregnancy. It has been found that complications during pregnancy are among the main reasons why the child has ADHD.

Diagnosis
ADHD is often mistaken or confused with autism largely because they might have similar symptoms. However, unlike autism, ADHD do have more complicated and serious signs. It is often noticed before the child goes to school and this is seen through attention span and impulsivity and if a child displays such behavior, it must then be monitored and further examined. There are however, additional reasons as to why a child can develop ADHD that include sudden changes like a death of a close relative, anxiety or depression which warrants further tests.

If your child is diagnosed with ADHD, it is important for you to work constructively with teachers. And here are some practical guides for parents to handle ADHD kids without blowing a gasket – don’t punish them and try to distinguish between rebellion and distraction, perform all chores with love, incorporate positive values, be consistent among all your children and give the child something in hand to fidget as it helps to calm their emotions while supplements have been known to reduce the symptoms as well.

Statistics
ADHD is common among children around the world in which the US have recorded that 5% of the children have this disorder. This is roughly similar for countries in other parts of the world where the average of children with ADHD is about 6 to 8%. However, it must be noted that there has been an increase of cases of children with autism which have been linked with the ADHD problem.