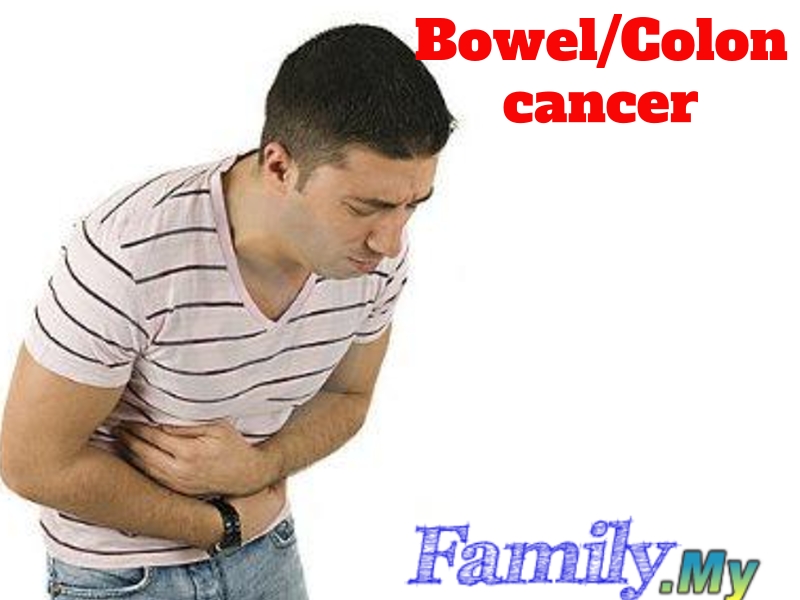 Bowel cancer is one of the different types of cancer where it goes by the name of colorectal cancer as well. It happens when there is abnormal cell growing around the bowel system that covers the appendix, colon or rectum.

Prevalence
Bowel cancer can happen to anyone at any age although it is more prevalent among those above 50 years of age. This is mainly because bowel cancer takes years to develop and would occur among those who do not take care of their diet. In Malaysia, there are close to 3,000 cases reported each year on those who have this cancer.

Prevention
Like any other type of cancer, it is when there is prolonged unhealthy practices in lifestyle that will encourage the growth of abnormal cells. Colorectal cancer happens to those whose lifestyle is unhealthy and damaging to health like alcohol consumption, smoking and eating of food with saturated fats. To prevent the occurrence of this cancer, the best method is to change the way of life.

Diagnosis
Among the known symptoms of bowel cancer is pain in the bowel areas, vomiting or constant diarrhea, then a full medical checkup will be required. This can be done through tumor biopsy that includes CT scan and MRI practices.

Specialists
When you have a problem with your bowel system, you will naturally seek treatment from your regular doctor. If the condition does not improve after medication and several types of treatments, then you might be sent for further examination as the condition becomes more serious. If you are diagnosed to have bowel cancer, then you will be referred to a cancer specialist like a medical oncologist specializing in chemotherapy, a radiation oncologist or a colorectal surgeon who will be involved in the surgery of your condition.

Symptoms
Blood in your stools are among the most significant symptoms of bowel cancer. If you experience this or bleeding from the back passage like your rectum, then you must have your condition checked immediately. Besides that, you might experience a sudden change in your bowel behavior like diarrhea for prolonged periods and looser stools often lasting for up to 2 months could be signs of this disease as well. Other symptoms of bowel cancer include a lump in your back passage or sudden loss of weight.

Medication
Bowel cancer is mostly treated using methods that are commonly adopted for most types of cancer-related conditions. This means that while there are certain types of oral medication involved in treating this disease, you will mostly be needed to undergo chemotherapy or radiation therapy. Oral medication used to treat bowel cancer includes Fluorouracil, Eloxatin, Campo, Irinotecan Hydrochloride, Oxaliplatin, Regorafenib and Leucovorin Calcium, among others.

Home Remedies
Recovering at home from bowel cancer will require a lot of changes not only in the lifestyle but more importantly in the diet and foods consumed. Turmeric is one type of spice which has been found to be a potent natural cure to aid in the healing of bowel cancer. It has curcumin which helps to fight cancer cells in the body from developing and stops the activity of hormone nuerotensin known to cause bowel cancer. Another common home remedy that can be used is apple cider vinegar which has been used to treat many types of cancer related problems.

The wonders of Carrots in curing Colon Cancer
An American author named Ann Cameron was diagnosed with colon cancer which she then went through an operation but had refused chemotherapy after that since she claimed to have improved and it then spread to the fourth stage having spread into her lungs not long after that.

Doctors told her that she would have only 3 years left to live and that radiation therapy or chemotherapy would not make much of a difference anymore. Prior to that, her husband had died of lung cancer and being a fighter as she was, she started looking for other treatments where she then read about a man who drank 2.5pounds of carrots daily and then recovered from skin cancer.

With that in mind, she started doing so, drinking the juice a few times daily and being careful about her diet. After 2 weeks, she went for a tomography examination which produced the same result but it was a miraculous turnaround 8 weeks later when it was found that the cancer cells have stopped spreading while there was a remarkable drop in the swelling of the lymph glands and tumours. 2 months later, the cancer continued to decline and her glands were as good as new.

And then, after practicing this for 8 months, the cancer had disappeared and cleared totally. That which makes the carrot juice so effective is that it helps to raise the carotenoid levels in the blood while its organic pigments helped to prevent the tumor cells from developing. The anticancer properties in the carrots were in the fatty alcohol and natural pesticide which helped to cure Ann.

Contact us now on how we can help you with Peptic Ulcer. +60126725888(SMS or whatsapp for international)

Ann Cameron Cured Her Stage 4 Cancer with Carrot Juice, Nothing Else