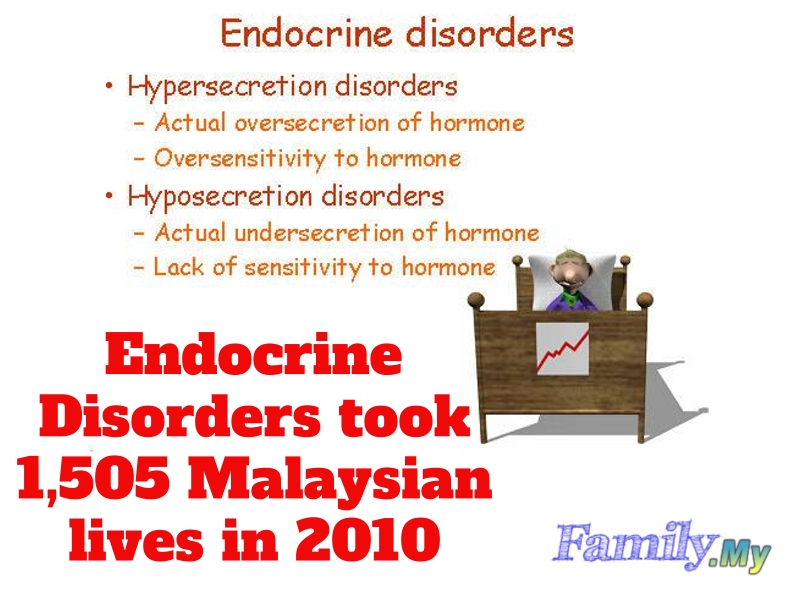 In Malaysia, one of the top killer diseases in 2010 was Endocrine Disorder. As reported by the WHO (World Health Organisation), that year recorded 1,505 deaths or 1.47% of the total deaths reported. To understand this type of disease, one must first understand what are endocrine glands and how it works.
The endocrine glands make up a network within the body system where this system is responsible to produce hormones that will control many body functions. The hormones are released that will influence the body’s ability to covert calories from the food intake into energy which will then be used by the cells and organs of the body.

This system is vital as it will determine how the growth of the bones and tissues would be, how the heart will be beating and even on other areas like the ability to conceive. Unknown to many, the endocrine system is pivotal on whether a person will develop other diseases like thyroid, diabetes and sexual dysfunction, among others.

There are many endocrine glands in the body, all of which are designed for specific purposes. This includes the Adrenal glands, the Hypothalamus, Ovaries, Parathyroid and many others.

It is when there are disorders in these glands that will cause health-related problems for the person where in extreme cases, could lead to death. Endocrine disorders could be broadly categorized either when the gland produces either produced too much or too little hormone. This will then cause hormone imbalance while it could be caused by tumors in the body system. When there is a tumor or an imbalance of cells, it could lead to further complications like cancer and other infections internally that could eventually lead to death.

In result, there are several types of Endocrine disorders where diabetes is the most common one. Other types include Adrenal insufficiency, Cushing’s disease, Gigantism or acromegaly, Hyperthyroidism, Hypothyroidism, Multiple endocrine neoplasia I and II, Precocious puberty and others. Collectively, all these types of disorders contribute to the total deaths of this disease in Malaysia which is at the sixteenth spot of the top killers in the country in 2010.