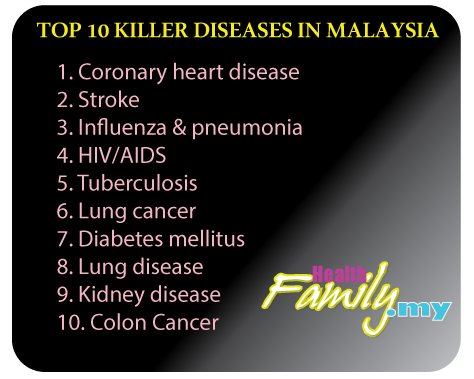 It must be noted that most of the major causes of the killer diseases in Malaysia are widely due to the diet and food intake of the victims. Apart from that, bad lifestyle practices are known as major causes as well. Malaysians faces similar health risks with its neighbors in the same region and much so with many other parts of the world.
Various types of cancers remain as the major contributors to deaths in Malaysia while lifestyle-related diseases like hypertension and stroke are very prominent as well.

According to the WHO (World Health Organisation), the top killer in Malaysia in the year 2014 was coronary heart disease which constitutes 29,363 deaths that year. The same disease was the top killer only 4 years earlier that took 22,701 deaths back in 2010.
In 2015, Coronary heart diseases caused 23.10% of the total fatalities recorded that encompasses the likes of heart attacks and other coronary problems. This trend has not reduced and more people has succumbed to this fatality ever since.

This disease which is resulted from the loss of blood channeled to the brain is the second top killer which caused the deaths of 11,943 Malaysians in 2010. Meanwhile, the number has increased to 15,497 in 2014 which is extremely alarming. Where this is concerned, stroke continues to be one of the biggest worries as most victims were not aware when it attacked which is why it is often called the silent-killer.

Collectively, influenza and pneumonia sit third in the top 10 list that carried 9,417 deaths among Malaysians in 2010. In 2014, this number has ballooned to 11,773. This is very dangerous because many people assume flu as a common problem and they are not aware that it is the third highest cause of death in Malaysia.

Infection of the lungs is the fourth most fatal disease in Malaysia. This is a very serious health problem as they are often exposed to many different types of flu viruses in the typical tropical weather. Lung disease is different from lung cancer where this problem involves inflammation of the lungs that caused death or other complications.
Back in 2010, lung diseases were the eighth highest killer with a fatality of 2,934 but it has more than 200% increased by 2014 constituting 6,797 deaths in Malaysia.

Although not a disease per se, road accidents contribute to 5.36% of the total deaths in Malaysia and is the fifth highest cause of death.

Diabetes is one of the most feared words in Malaysia. Commonly known as ‘kencing manis’, it is the seventh top killer in Malaysia with total deaths amounting to 3,205 in 2010. Some 3 years later, it has moved up to the sixth spot with 4,760 deaths reported. This simply means that Malaysians are consuming more sugar than ever and more are succumbing to this disease. Even with the increase of price of sugar in Malaysia, preparation of food using this ingredient has not reduced significantly.

Breast cancer is just one of the many cancers killing Malaysians each year. Most prominent among women, this is one disease which has become more prevalent than ever in recent years. As the seventh top killer disease among Malaysians, it took 2,535 lives in 2014. It has been found breast cancer is one of the most randomly found diseases.
Reports have shown that each year, about 5,000 women were diagnosed with breast cancer. They are usually between 30 and 60 years old while about 50% of these are below 50 years old.

Lung cancer was the sixth top killer in Malaysia in 2010. It reported 3,309 deaths that year, making it the highest among all other types of cancer-related deaths like Colon-Rectum, stomach and breast cancer respectively. Lung cancer is commonly related to lifestyle habits and is usually associated with smokers and those who inhale dangerous gas like carbon monoxide too frequently. As such, it is very prevalent with people in the urban cities and towns as well as those who are working in high industrial areas like manufacturing plants and factories.
3 years later in 2014, lung cancer continues to be one of the top killer diseases in Malaysia. It killed 4,088 Malaysians that year and is ranked eighth. This does not mean lesser people are dying from lung cancer but was due to the increase of deaths from other diseases.

Undoubtedly, the Human immunodeficiency virus infection / acquired immunodeficiency syndrome (HIV/ AIDS) is one of the top killers in the world. In Malaysia however, it was ranked eighth in terms of fatal health diseases in 2010. This has already changed by 2014 where it has since increased to 4,848 deaths, putting it on the ninth spot in terms of killer diseases.

10. Common and other injuries

A combined total of common and other injuries contributes to 3,804 deaths in Malaysia, making it the tenth highest killer.

Kidney diseases amounted to 2,571 deaths as reported by WHO in 2010 and this is mostly caused by inappropriate diet and food intake. Such habits will only lead to kidney damage and causing them to malfunction. Further damage will involve them being infected thereby restricting them from functioning efficiently. As such, the body is unable to filter the good and bad food and breaking down of minerals for the internal body system’s consumption.
The deaths resulting from kidney diseases have been extremely alarming in recent years. With 2,571 deaths reported in 2010, the number increased to 2,768 in 2014 making this the eleventh most fatal disease among Malaysians.

Another form of silent-killer, hypertension falls within the top 20 killers in Malaysia. It is among the most common condition reported in the primary health-care centres. If not treated, hypertension can cause premature deaths, renal failure and most commonly, stroke. In Malaysia, hypertension is the thirteenth top killer disease. In 2014, it caused 1,684 deaths.

According to Malaysian Health Ministry’s Pulmonology Services department, there is an estimated 2 million asthma patients in Malaysia. This is a very dangerous disease which can attack a child from childbirth onwards. If not treated and monitored, asthma will lead to death. As such, it is the fourteenth top killer disease in Malaysia, contributing to 1,642 deaths in 2014.

Liver cancer has been a major killer disease among Malaysians for many years. It is among the top few cancers that collectively killed thousands. In 2014, liver cancer ranked fifteenth in the top killer list which took 1,733 deaths. It was reported in 2011 that the common types of treatment for cancer like surgery, systemic chemotherapy, and external radiotherapy were not effective in treating liver cancer. Instead, a new method called radioembolisation (RE) or Selective Internal Radiation Therapy (SIRT) could be used.

Death from falling might not be a disease in itself. However, it constitutes the sixteenth spot in the top killers in Malaysia. This refers to many types of occurrences which could be stemmed from a person with mental health issues, depressions or other symptoms. In 2014, falls caused 1,611 deaths.

Tuberculosis or more popular known as TB is the seventeenth top killer in Malaysia. This is one of the oldest type of health problems which dates back to many decades. It occurs when the lung is infected by bacteria which caused unrepairable damage. In Malaysia, the number of deaths caused in 2014 was 1,554 with the total number of cases reported standing at slightly more than 20,000.

This can otherwise mean heart disease. There are many variations to this but collectively, they contribute to 1,444 deaths in Malaysia in 2014. This puts inflammation/ heart at the eighteenth spot of the top killer disease in Malaysia.

Problems like fatty liver is very common and prevalent in Malaysia. This is mainly attributed by the food intake and the common daily diet of Malaysians which are predominantly salty and oily. If not checked or taken in moderation, it would lead to some very serious conditions. It was reported in 2014 that about 60% of Malaysians are at risk from fatty liver.
This health condition is very serious and must be treated by reducing unhealthy food intake especially those that are fried and contain a lot of salt. Besides that, alcohol intake must be reduced as well.

Prostate cancer is among the top 10 types of cancers that cause death among Malaysians. In terms of killer diseases, prostate cancer is the twentieth most fatal diseases. it is very common among males although it is more prevalent among those above 50 years old. Totalling to 496 deaths in 2014, prostate cancer occurs when cancer cells start developing around the base of the bladder.