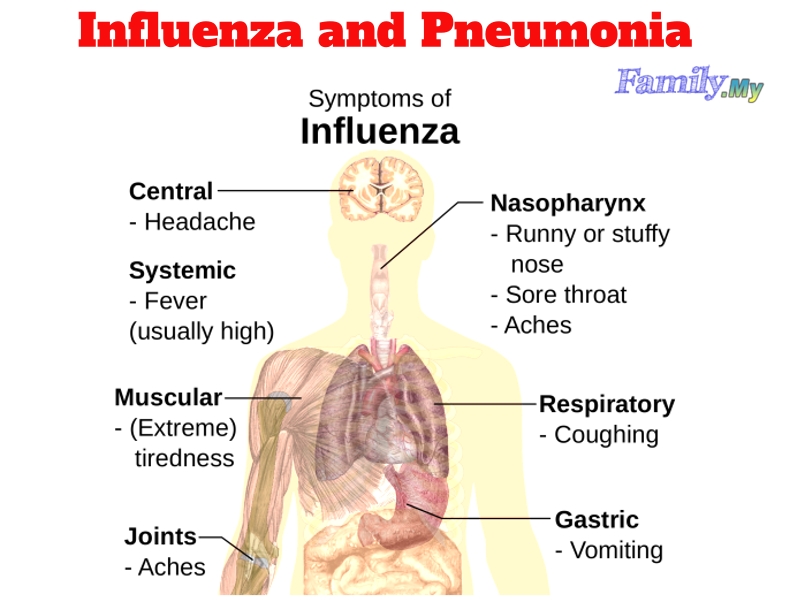 It is often unknown or passed on as harmless but influenza and pneumonia combined is the third highest killer in Malaysia. This is mainly because many who have the ‘flu’ feels that it will come to pass very quickly. However, if the flu is not treated properly, it could lead to more problems and in some extreme cases, it could lead to death.

To understand the risk of flu, it must first be differentiated from the mild illness type like a cold that causes sneezing and wheezing. The real type of flu is usually more serious and lasts for a long time. Although it is common in cold countries, Malaysia’s tropical and often rainy seasons would cause the flu as well. As it is widely known, there are various strains of the flu which could cause mild to serious symptoms.

On the other hand, pneumonia is when an infection happens to the lungs. Bacteria and viruses are the major causes of pneumonia where it could lead from mild problems to some very severe ones. A person who contracted pneumonia would face problems like coughing and fever. Some serious cases would involve trouble breathing and cold sweats. Phlegm is a very common symptom of pneumonia.

In some cases, influenza and pneumonia are related as they have similar symptoms where certain types of viruses that start with the flu would lead to more problems like infection of the lungs.

In Malaysia, it has been reported by the World Health Organisation that influenza and pneumonia collectively contribute to 9.2% of the total deaths in 2010. This is 9,417 of the total deaths that were reported that year and is the third highest killer in terms of health-related problems.

Pneumonia and influenza are diseases that can be treated where it could start from simple medication from over-the-shelf products. However, for the more serious cases, the patient would need to be admitted to the hospital for further treatment.

The best way to prevent serious cases of influenza is to obtain flu vaccines each year. This will help to prevent you from contracting the viruses that are detrimental to you. Flu viruses do not discriminate and they can attack anyone from newborns to the elderly. It has been recommended that such vaccines start from as early as 6 months and be taken by adults of any age. Meanwhile, the risk of pneumonia can be reduced by not smoking and avoiding people with flu symptoms.