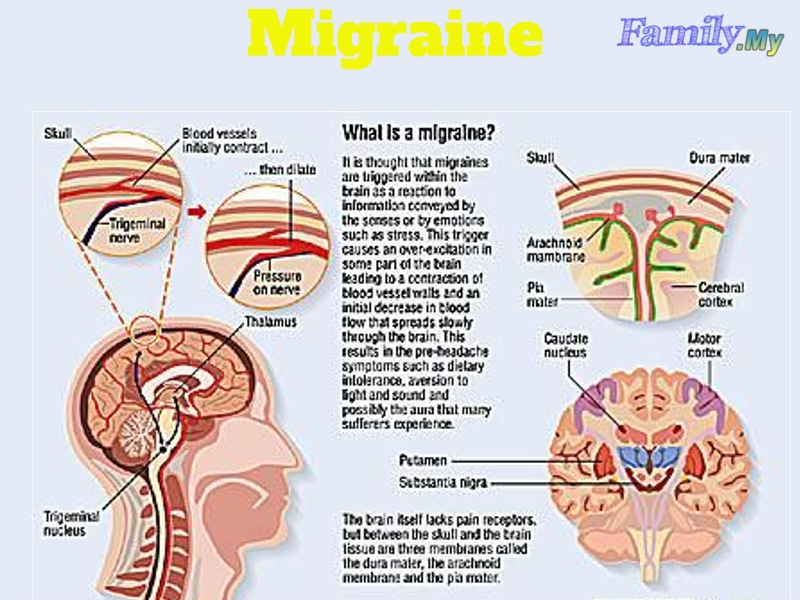 Migraine is a health-related problem where the person suffers from an intense headache on one side of the head. A migraine is basically a type of headache which unlike the common fever of cold is a recurring problem for the patient. The pain can be minor while at times very extreme where the patient will usually take medication to reduce or subdue.

People with migraines are usually accustomed to the pain and some have ‘aura’ which are warning symptoms that a migraine is about to attack. An aura is a group of symptoms where the person gets a ‘heads-up’ that a bad headache might be occurring very soon. This could be in terms of vision disturbances, vomiting and nausea.

To many patients of migraine, they tend to accept that it is a health condition which could be hereditary. They can happen at any time of the lifespan while the most common cases usually appear between 10 and 45 years of age. Migraines are more prone to happen to women than men.

Prevalence
Migraine is actually caused by abnormal activity in the brain where there could be a surge of activities or anything that the brain usually do not or cannot handle. While it remains unclear on the exact causes of migraine, experts believe that this problem starts from the brain and then heads on towards the nerve that causes the pain.

A migraine can be triggered by many reasons like loud noises and bright lights while the patient could contract this problem through alcohol consumption, stress and changes in lifestyle patterns. Smoking and certain types of food intake could bring about the problem as well.

It is however untrue that migraine would lead to a serious medical problem like brain tumour and such and this must be ascertained through a professional medical examination. Symptoms of migraine include blurred vision or vomiting which are commonly the warning that a migraine is going to happen while the patient could experience pain in the eyes, tunnel visions and even constant yawning as well.

There are no exact methods to treat migraine headaches where one could take aspirins or more sophisticate medication from the doctor. However, one can work toward reducing the attacks by noting down a diary of the triggers thereby reducing the chance of such problems. There are known medicines that are prescribed to treat migraines while a healthy diet of food that are rich with nutrients and vitamins to enhance the blood flow of the body system is recommended.

Prevention
The main problem with people who have migraines is that there are no actual solutions on why its occurrence. As such, it is often challenging to determine the best way to prevent migraines from happening. In many instances, patients see migraines like a curse which they have to endure. The best way to prevent this is to identify what caused the headaches to occur. This could mean a major lifestyle change. If the migraine happens after spending more than an hour on the television, then the trigger could be from the glare and as such, you should consider watching less television. Another method of prevention is to take specialized medication like antiepileptic drugs like Depacon and Blocadern, among others.

Diagnostics
Migraines can sometimes be confused with severe headaches where the former is a medical condition where the patient gets constant pain at certain parts of the head. This can happen regularly. In most situations, migraines can be hereditary where the patient experiences this problem as there are family members with the same condition. Among the methods that doctors are known to run to ascertain if you have a migraine situation includes blood tests to identify if there are infections in your spinal cord, CT (Computerized Tomography) scans, MRI (Magnetic Resonance Imaging) scan or even a spinal tap for more serious situations.

Specialists
Migraines can be a long-term medical condition that which needs treatment and you will probably determine this via your own family physician. In most cases, the medical doctor is able to prescribe standard medication to treat migraines while in more serious situations, a specialist will be required. This is when your family physician thinks that you will need further tests because it might not be an effective method to use such medications in a long-term.

These days, headache clinics are quite common in which there will be a team of professionals like internists, neurologists and therapists who can help you with your migraine. Neurologists will be the best specialist to talk to as they are focused on the brain and nervous systems while some would be trained to treat migraine and related problems.

Symptoms
In most cases, migraines go through the stages of prodome, aura, headache and postdome. You could be experiencing symptoms like constipation, depression, hyperactivity and tiredness during the prodome stages. Meanwhile, before the migraine attacks, you could experience flashes of light and other problems pertaining to your visual ability while some might even experience speech problems. During the headache, you could feel pain on either one side or both sides of your head which can be excruciating. Other symptoms include blurred vision and vomiting while fainting is quite common as well.

Medication
To treat migraines, there are medications which can be obtained over-the-counter or prescribed. Over-the-counter drugs include aspirin, paracetamol, naproxen, acetaminophen and ibuprofen which are generally painkillers. Meanwhile, you could be referred to prescription drugs like butalbital which is used with acetaminophen that helps you to sleep and relax. Besides that, other types of medication include ergotamine and dihydroergotamine mesylate and triptans like almotriptan, frovatriptan and naratriptan.

Home remedies
Headaches can be quite common but if you think you have migraines, you could practice certain types of home remedies before becoming too dependent on drugs. This includes using lavender oil which can be applied or inhaled as used in aromatherapy. Besides that, you can use peppermint oil while Basil oil is used as a muscle relaxant. Meanwhile, you must start working on your diet regularly, reducing foods with saturated fats and salt which can increase your blood pressure while diary foods and chocolates have already been linked with among the cause of headaches and migraines when taken too much.

Contact us now on how we can help you with Migraine. +60126725888(SMS or whatsapp for international)