Sitting for too long will kill you faster 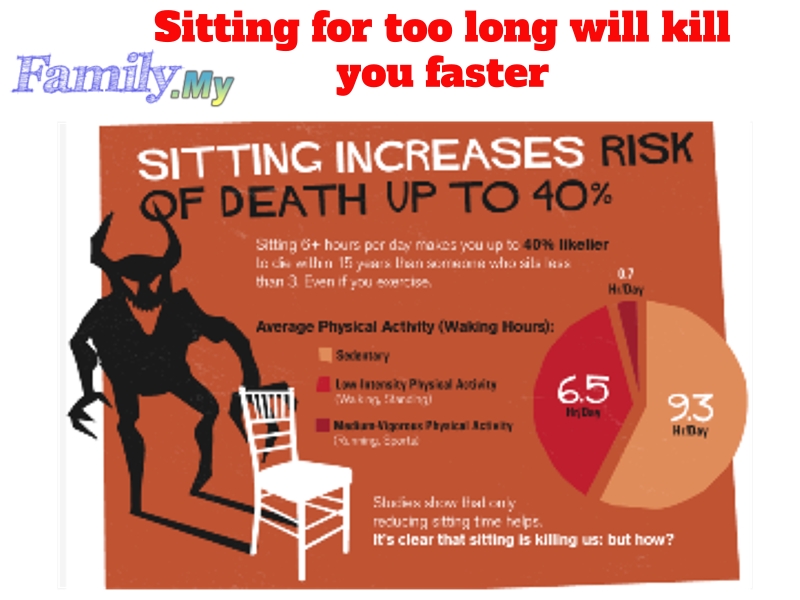 Many health experts and the so-called experienced advisers would have told you that your seating posture is very important. It actually has both short and long term effects to your health and if you are not careful and do not pay enough attention to it, it could increase your death risk.

Of course, you would know by now that sitting is a form of rest and resting is something you will need. However, if you are in a seated position for too long, it actually has adverse effects.

The whole idea is not to sit too much. For many years, researchers have associated sitting for long periods with higher death rates. It was found that if you are seated for more than 6 hours per day, you have a 40% higher chance of dying in the next 15 years than those who do not sit for that long. And this is even if you practice a healthy lifestyle of exercising and constantly going to the gymnasium

Studies have shown that obesity and metabolic syndrome are among the results because sitting for too long will aid increasing of blood pressure, high blood sugar and excess body fat, especially around the waist.

Taking breaks by walking around would be a healthier thing to do and this applies mostly to the couch potatoes who spend hours watching television and those who are confined to their cubicles when working. People who play computer games for prolonged hours have been reportedly died while teens are found to have lesser self-control and those are not really good news. After all, apart from your back and your health in general, it could strain your eyes as well.

In other studies, it was even linked to heart diseases and even cancer, although that might be a bit too far-fetched. Whichever way one sees it, too much of something will not be a good thing so its time to get up, walk around and take breaks before you hit the next channel for the next movie of your marathon, if you don’t want to die earlier than expected.

Simple exercises to ‘repair’ your spine for sitting too long
Meanwhile, the following exercise methods that can cure your spinal damage brought about from long duration of sitting.

Couch Stretch – First, place a leg on the floor and the other on the couch. This means your knee is in contact with the back and then spread your abs and backside to allow your torso to elevate. What you want to do is to get to a standing position. After that, hold the position for 3 to 5 minutes before repeating the process using different sides.

Glute bridges – First lie down with your knees twisted while your feet is firmly rooted on the ground. Slowly raise your backside and hips until your body forms a line. Then slowly lower you back to the ground again. Do this 10 times and then repeat the process 3 times.

Grok Squat – Squat down onto the ground. Ensure that your back is straight and lower your backside as low as you can. Stay still for 3 minutes, then stand up and repeat.

Fire Hydrant – Put yourself in a ‘crawling’ position. Raise one leg to the side. Try to go as high as possible while remaining at a ‘bent’ position. After that, lower down your leg and try the same for the other. Do this 20 times at 1 minute intervals for 3 rounds.

Leg Swings – Hold onto a rail (like the ballet gymnasiums). Use both your hands and then swing your leg to the side as high as you can. Repeat for both legs.