Stop Eating these 10 ingredients immediately before it kills you! 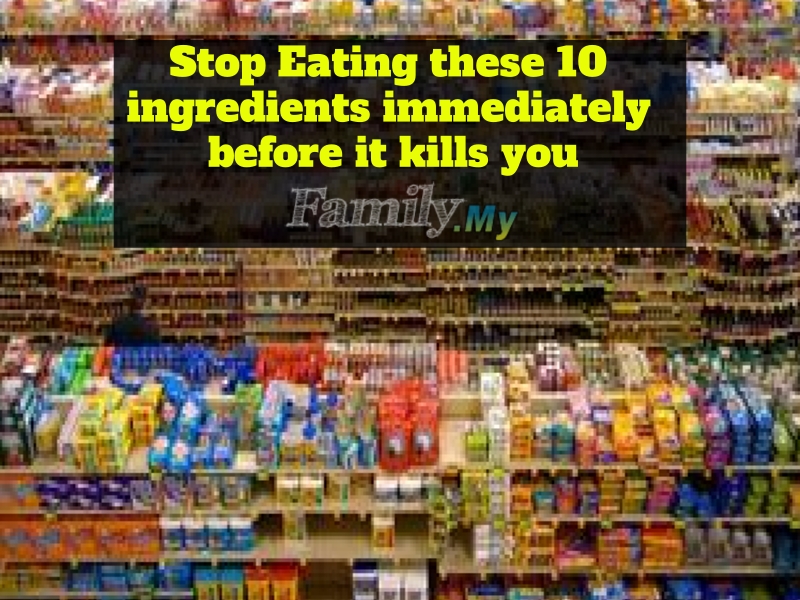 Processed foods are very common today. It has been found that more than 90% of the foods you buy in supermarkets today are made with ingredients that are not useful for the body. In fact, some of these ingredients can be extremely harmful and could lead to diseases. So, it would be best if you go for organic foods and start avoiding foods that are made with the ingredients we list below.
MSG – Monosodium glutamate is no stranger to the dangers of health. It has already been linked to all types of diseases like hypertension and even cardiovascular problems and people are still happily adding Ajinomo in their cooking.

Artificial Sweeteners – This replacement for sugar is so common and popular, many people believe that they will be the next big thing after sugar. Artificial sweeteners area very commonly found in low-fat foods like yogurts, diet colas and almost all types of junk foods. Among the names they come with are Acesulfame Potassium, Aspartame, Glycerol, Hsh, Isomalt, Lactitol, Maltitol, Polydextrose, Saccharin, Sorbitol and Sucralose.

Potassium Bromate – This is a type of additive which is very popularly used for making bread. It has already been banned in many countries but are still quite used by many producers. Mostly found in pre-made pizzas and baked goods.

Sodium Benzoate – This is a very common ingredient used to preserve foods. Sodium Benzoate deprives oxygen for the mitochondria in the body and is very commonly found in pre-made salad dressings, many types of drinks and juices.

Acrylamide – Any food which has been heated above 120 degrees Celsius will contain this which includes French fries and many types of junk foods.

Sodium Nitrite – Basically, it is the more scientific word for the common salt found in everyday cooking. Found in most types of processed foods and can be very high content in hot dogs and bacon.

High Fructose Corn Syrup – This is a type of sugar which comes from corn. Used by some producers in sodas and as a replacement for sugar, it has already been linked to known diseases like diabetes and for building up of mercury. Other known sources include processed cereals and many types of condiments.

BVO – Otherwise known as Brominated Vegetable Oil, this additive is used in flavouring of sodas and isotonic drinks. It has already been banned in many countries where it has bromine linked with nerve problems. Once used in some of the most popular brands, it has since been removed from Fanta and Gatorade by the producers.

Blue, Green, Red & Yellow – These are the shades to be avoided when it comes to artificial coloring. Blue 1 and 1, green 3, red 3 and yellow 6, to be more precise where they have all been linked to various types of cancers and they are very commonly found in candies, juices, sports drinks and just about anything else that come with that tone of coloring.

BHA & BHT – These 2 names are short for Butylated hydroxyanisole & butylated hydroxytoluene respectively. They are in actual fact preservatives which can prevent the fats from being broken down by the body. They are very popular in lard, potato chips and many types of junk food.