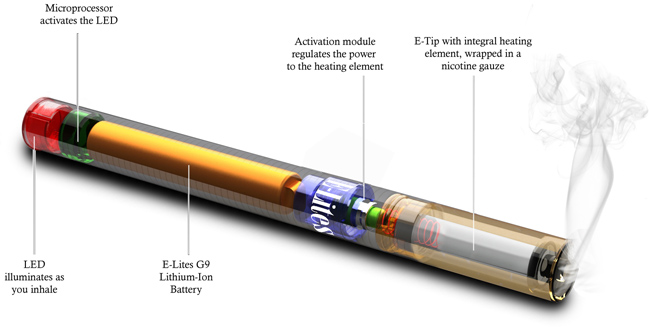 An electronic cigarette (e-cigarette) or also commonly known as personal vaporizer was introduced in the market since 2003 to provide an option for smokers to change from traditional cigarette to e-cigarette. A battery-powered device, it is free from harmful substances such as carbon monoxide and tar which can be found in traditional cigarettes.

It comes in the shape of an elongated tube that closely resembles real cigarettes, pipes and cigars. But most of the e-cigarettes in the market are designed in ‘pen-style’. Since it was launched in 2003, a number of smokers using traditional cigarettes switch to e-cigarettes as the device is replaceable and refillable. But to convenient some smokers, a disposable e-cigarette was introduced later on.

The greatest benefit of having an e-cigarette is that it  help smokers save money since it is easy to refill. Just purchase propylene glycol in bulk and refill it in the cartridges. Therefore, it saves the time to go to sundry shop to get heaps of cigarettes from time to time. Besides that, smokers can also observe the nicotine intake on a daily basis and have full control over their habit.

Thus, smokers do not have stale tobacco smell all over their hair, clothes, office or home. The invention of e-cigarette is indeed a good news for heavy smokers who would like to smoke in public places such as cinemas, airplanes, restaurants and shopping malls.

Some associate e-cigarette with green smoke as it offers less pollution compared to traditional cigarette. In certain cases, smokers tend to dump and throw the cigarette butts everywhere from parks to sidewalks and even on beaches. Bear in mind that the cigarette butts contain harmful substances.

Therefore, when it is carried of the beach and eaten by seawater animals such as fishes, it is deadly and might kill these sea lives. It is often difficult to persuade the smokers to dispose it properly in the bins.

But with the invention of e-cigarette, it helps the environment since the plastic filters used in the device is refillable. So of course, smokers would not simply dispose it like cigarette butts. Best of all, the plastic filters are recyclable. And as mentioned earlier, the device only emits vapor thus, it reduces the release of harmful substances and help to improve the environment altogether.

Did you know that one of the biggest causes of wildfires is due to human’s carelessness in disposing lit cigarettes? Therefore, it is advisable for smokers of traditional cigarettes to switch to e-cigarettes. Statistics showed that an e-cigarette refill cartridge equals to about 10 cigarettes. To sum it up, when you switch to e-cigarette, besides reducing the amount of cigarette butts on a daily basis, eventually you are also reducing deaths caused by wildfires in certain countries such as United States.

Before you purchase a starter kit, find out the type of battery charger used in the device. It may come in the form of USB charger, car or the conventional wall outlet. Basically, rechargeable battery is the largest component in the device.

Meanwhile, a cartridge or also known as mouthpiece is a disposable plastic cup attached on the end of the elongated tube. In some e-cigarette, a smaller plastic cup is affixed inside the mouthpiece that serves as an absorbent component to allow air flow so that smokers can inhale the vapor directly. Smokers can refill or replace the liquid in the cartridge when it runs out.

Another component in the device – atomizer works as a heating material to vaporize the liquid in the cartridge to enable smokers to inhale it. You have to replace and change the atomizer once a month (provided if you use the e-cigarette frequently). Smokers commented that they usually spend more money to replace this atomizer than any other components in the device. Some manufacturers designed a combination of pre-filled cartridge and atomizer into a disposable element known as cartomizer.

Other components found in this neat invention are electronic airflow, timed cutoff switch, vacuum switches, tactile switches and coloured LED. All in all, if you think that e-cigarette is a tool to help you quit smoking, then you are wrong. Manufacturers clarified that the device is merely a smoking option for smokers to enjoy a dose of nicotine.