Lung Cancer is among the top 10 killers in Malaysia 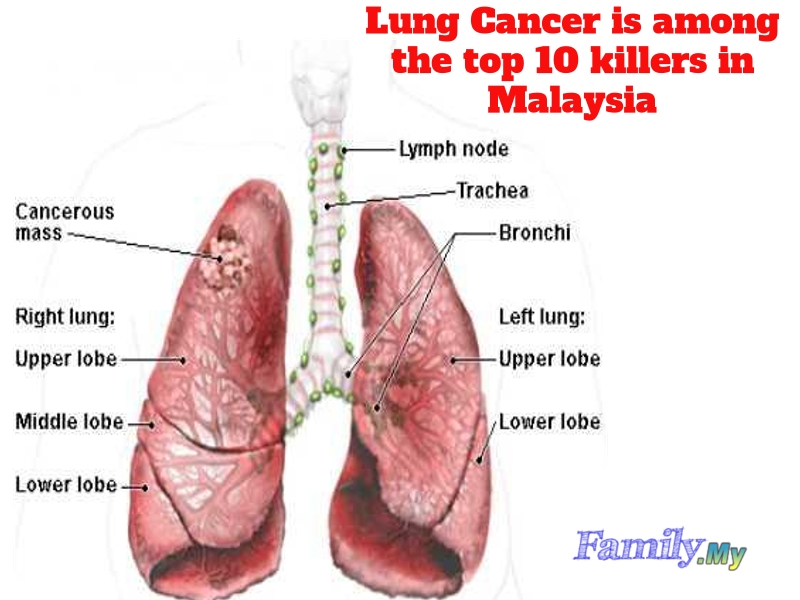 When it comes to cancer, there are many different types and this is one of the biggest health-related problems in the world today. Cancer comes in many different forms and shapes and in Malaysia, Lung Cancer is the most common type among many others.

There were 3,309 of deaths that resulted from lung cancers being reported in 2010 by the World Health Organisation. This constitutes to 3.97% of the total deaths of that year, making it the seventh highest number of fatalities reported.

This disease occurs when there are abnormal cells that are growing uncontrollably either in one or both the lungs which are most commonly found in the air passages. What happens is that instead of developing into healthy lung tissue, they form tumors which would then restrict the ability of the lungs to provide oxygen to the blood. Oxygen very important in the blood which must be channeled to the heart and brains in order to keep them healthy and functioning. This will in turn ensure that the person stays alive.

If there is a problem with oxygen in the blood, the heart will be deprived off the supply which will then lead to problems like heart attacks while the brain might suffer a stroke when there is not enough oxygen.

Lung cancer is the top killer among all types of cancer not only in Malaysia but in the world as well. Each year, there are more than a million deaths recorded globally that comes from lung cancer. This is followed by stomach cancer which records only about half of that amount.

A majority of lung cancer cases are diagnosed from people of the elderly age although it is starting to become quite common among those in the younger years.

Lung cancer is commonly contracted among those who inhale damaging gas or smoke. This is most common among people who smoke while those who are exposed to gases like asbestos or those from vehicles are at risk as well. To avoid or minimize contracting lung cancer, the best option is to stop smoking while those who are working in factories or with vehicles should wear protective masks at all times.

In Malaysia, sometime in the middle of the year, the country faces a haze situation due to open burning from Indonesia. This is when Malaysians are advised to wear protective masks as they are open to risks in the future of developing this disease.