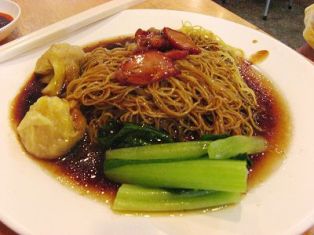 Wantan Mee is known in most quarters as the top Chinese noodle dish around. Wantan Mee is served using the specially-made egg noodles which come in ‘balls’. This food is equally as popular in Malaysia and is most common among the Chinese community. Some of the top Wantan Mee shops can be found in places like Petaling Street and almost every coffee shop you can imagine.

The default serving is the dry Wantan Mee which is usually served dry with several slices of Char Siew and dumplings as well as some vegetables. However, some might prefer to enjoy this dish with soup which is less fattening as it does not use too much soy sauce.

For a bowl of Wantan Mee Soup, you will get 217 calories while a dry one is almost double at 410 calories. Meanwhile, a few slices of Char Siew will get you about 190 calories which means a basic Wantan Mee is about 600 calories.