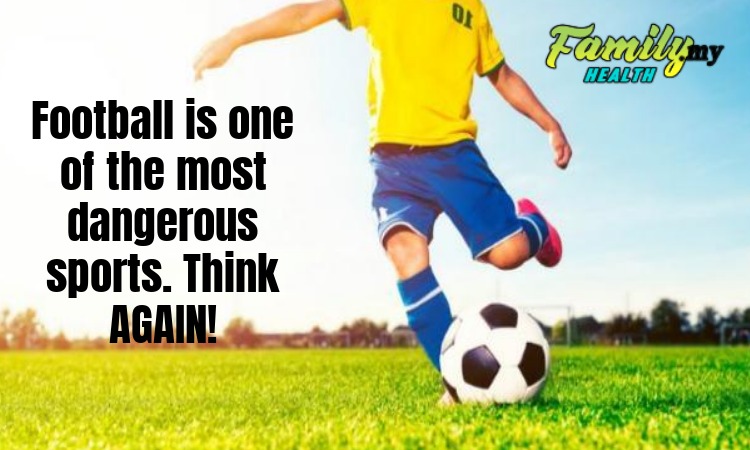 From an early age, sports have been cultivated in schools. As a parent, you tend to send your child for swimming or football (soccer) classes to build confidence and competitive spirit. But did you know that some of the so-called ‘harmless’ sports can be very dangerous?

Each year, hundreds of thousands of children are sent to emergency rooms for treatment caused by sports. The most common problem are TBIs or traumatic brain injuries which could lead to brain-related diseases like Parkinson’s and Alzheimer’s later in life.  Here are the top 5 most common ‘dangerous’ sports you thought was safe.

Football – Known as soccer in other parts, this is one of the top sports played and watched across the world. The World Cup is the highest watched sport with billions of viewers each year. Boys are known and encouraged to take up the sport but you must be aware that they are at highest risk of sprains and injuries to the thighs, upper legs and knees which can cause walking difficulties later in life. In football, heading the ball is common and that can lead to brain trauma.

Basketball – This team sport is very popular in Asia as well as the USA. Without proper warming-up before playing, it could lead to sprains in the back and legs or to cramps. The ankle is the single most common injury for this game while torn ligaments and limbs are common injuries as well. Statistics shown that there has been 1.5 casualties reported in every 1million.

Athletics – This includes many different sports like javelin, high jump and long jump. 4.7 casualties are reported in every million with hundreds of permanent disabilities. In 1997, an athlete reportedly died after suffering neck and head injuries during a high school pole practice.

Wrestling and boxing – Not referring to the likes of WWE, wrestling and boxing would be 2 very dangerous sports although they are often encouraged in schools. In fact, this extreme contact sport is being glorified in light of the rising popularity of those seen on media. Concussions, back injuries, internal haemorrhage are among the injuries reported in these sports.

Cheerleading – This is a popular sport in the US and gaining in Asia. Cheerleading today is no longer a female sport with men taking part as well. In the name of competition, cheerleaders are pushing the boundaries often sustaining injuries due to falls and knocks.