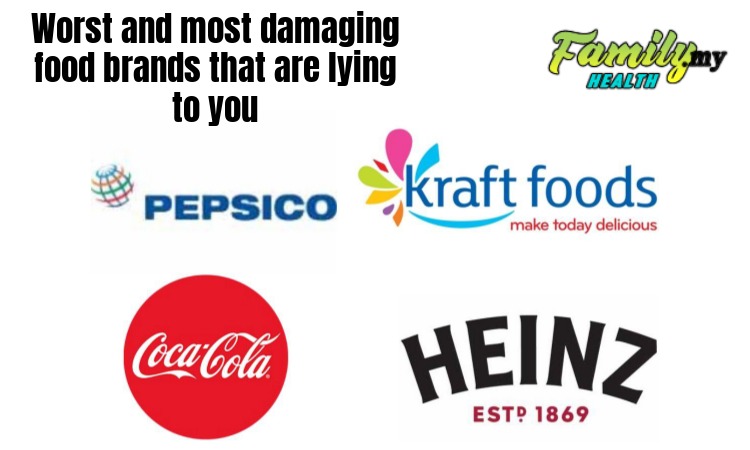 Every day, we take food which we think is ‘safe’ which means we do not think twice when eating. A lot of food manufacturers tell you that their food is safe for consumption and that there will be no harm even if you eat them everyday. But what you do not know is that they continue to use GMOs (Genetically Modified Organisms), artificial flavourings or colourings, hormones and unhealthy additives which in the long or medium turn will cause your body more harm than good. Here’s among the worst of them.

PepsiCo – Pepsi stopped using carcinogen in its drinks but continues to use the 4-methylimidazole, or 4-Mel which has been associated with causing cancer. Besides that, its sugar fructose level is quite high which is linked to obesity.

Coca-Cola – This brand needs no introduction. It has a whole list of additives in its world-wide popular drink even if it is Diet, Light or Zero.

Heinz – Perhaps everyone’s favourite tomato sauce brand where it claims only to use natural GMOs in its label. The list of ingredients used in its products is alarming which includes high fructose corn syrup and non-organic tomatoes.

Hershey’s – This is a popular chocolate brand but it has been found to have lead and cadmium in its products which can cause a myriad of health problems.

Kraft – Closer to home, Kraft Foods has been known to use Yellow No.6 (a type of artificial coloring agent) in its Mac N’ Cheese product. In fact, Kraft had to recall some 6.5 million boxes of this product in early 2015 as fragments of metal were found.

ConAgra Foods – Heard of Healthy Choice and Slim Jim? ConAgra was once convicted for violating health code in which their food processing facilities were found with bacterial contaminations while practicing unethical factory-farm sourcing.

Kellogg’s – Everyone’s favourite cereal brand. Using GMO in its products seem to be ‘normal’ for this brand.

General Mills – Among additive and flavour enhancers that General Mills use include TSP (Trisodium Phosphate) and BHT (Butylated Hydroxytoluene) while it has been criticized for using GMOs in almost all of its products.

Nestlé – Surprise as it seems but this multi-billion dollar brand has a track record of using industrial poison melamine which is the same substance that caused 50,000 Chinese infants to fall sick back in 2008.

Campbell – Who hasn’t heard of the Campbell’s Soup Company? Its resin cans were made using BPA (Bisphenol A) which has been associated with cancer, diabetes and obesity, just to name a few.